On November 5, 2008 George was found and returned to us. What a joy to have him back in the family! Click here to read his story.

A letter to George; "I wish you were home."

You were our 3 1/2 year old, 14 lb cat. You were from a litter of kittens we rescued from a feral life in our neighborhood. You have three siblings, one of which is an almost identical twin. When you were babies, we couldn't decide on names for you and since you had a dark nose, and your twin had a slightly more pink nose, we called you Black Nose and Purple Nose. Your veterinarians and their assistants thought this was very funny. As it turns out, yours was the second litter of kittens we had rescued (the first being four kittens also) as well as trapping and neutering all the other feral's in the neighborhood (about 5 others). As you were the last, we were having more and more trouble coming up with names. At long last, we decided to name you after the Gershwin brothers.

You George, and Ira have distinctly different personalities, but were pretty much companions. Although you did have slightly different routines, you were most often found curled up together somewhat resembling a Yin Yang. While you have a bit of a Blue tinge, Ira has considerably more. 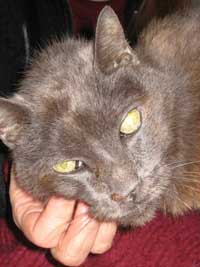 You have a wonderful build, George. You have no special markings, but your solid grey color and round, gold eyes are smooth and beautiful. You are very large (not fat) and lion-like in appearance and walk.

Head down, you walk very powerful and proud. But I'm never fooled. You are a human-lover. Not that you don't like to "hunt". I certainly remember all the evenings you called me out of the bedroom to watch you recline on the carpet with single paw outstretched toward the moth you had so "skillfully" caught. Your purring was loud enough to hear at a distance. Of course I was very impressed and offered you much praise for keeping our yard moth-free. You may remember the one night we had a variation on the moth theme in favor of a tomato worm. You know, those big, fat, ugly, green ones you find on tomato plants. It was much harder to praise you for bringing that in onto the carpet.

You had a very particular routine. You would often sit at the foot of the bed in the mornings waiting for us to get up, maybe looking out the french doors at the backyard. Then you would very carefully walk right in front of our feet. If we went the wrong direction you would run to get in front of us again, respectfully leading us to your food dish. Very often you didn't even eat what we put in, just wanted to make sure it was there. Then you would wait while coffee (human breakfast) was made. Once finished, you always requested a sniff, and then you and I would go for a walk around the yard. We would look at all the plants and flowers when in bloom, and you would also check out what creatures had been around during the night.

After the walk, I would leave for work, and you would curl up either on the bathroom counter or on the sofa. I think you mostly slept all day, but when I came home at night, you would be ready for dinner. After dinner it was play time, outdoors if the weather was good, or the living room carpet otherwise.

You definitely didn't like the rain. You would insist I open the kitchen door, and you would look disgustedly at the rainwater dropping and then at me with your ears back, as if to say, "Turn It Off!!!".

You had several games you liked to play. One of your favorites was for us to hold up a towel so that the bottom of it touched the floor. You would then rush at it and we were to drop it on top of you. Then we would drag a string or something like it across the top end of the towel with you reaching out to catch it. You could play this game forever. Another of your favorite games was to have me toss small pebbles into bushes or tall grass so you could pretend it was some kind of insect or animal to be hunted. You also loved to catch the "magic string" which comes from the bathroom faucet. That amazing string that dissolves when you touch it. You were sure that someday you could be fast enough to prevent it from dissolving. You also loved to drink from the faucet or garden hose. I miss those things with you.

George, you loved peanut butter. If I were making anything with peanut butter, you would fight me for it. Do you remember the day I gave you some, and then went to sit on the patio to eat mine. You came bounding out of the house, across the patio, leaped onto my lap, put both front paws on my chest and looked me right in the eye. Of course I decided I was finished.

You were always so sensitive to my moods and feelings. Do you remember when Frank was writing his book. It took so long, and there were always people around the house. That really started when you were a baby. It took so many years and got so hard for us at the end, I know I didn't spend enough time with you. I'm sorry. Humans can be so ignorant of the importance of the here and now. We seldom think about the fact that today will never be here again, and what we miss today won't necessarily be possible tomorrow. Like you.

Do you remember when I moved across the street while the house was being remodeled. You hated that. You insisted on staying "at your home". The noises and heavy things dropping. People always coming and going. Strangers invading your life. And it took so much longer than it was supposed to. You were so reluctant to spend time with me across the street instead of at your home. When you would come, you liked to be on top of the refrigerator, so I put towels up there for you to lay on and watch out the kitchen window. You just never would stay very long. I really missed your company then. And when you would spend the night, I would wake up with you curled up at the end of the bed purring. Well the remodel finally ended and the house is ours. You would have loved it, George. The upstairs bathroom windows are a great cat place. You can lie there and look out over the roofs of the neighbors, and down into our backyard, and at the trees and phone lines with the birds lined up. You'd also like the wide windowsill over the bed. And the kitchen is great. Big and bright with another one of those wide windowsills. And of course the dining room table has been taken over by your siblings as the place to watch the action. You can watch the street activity from the top of the TV. There are so many great cat places, I'm sorry you left too soon to experience them. I'm also sorry you left too soon to know life would get better for you. No more construction workers making noise, no more strangers. Unfortunately, no more you.

There are so many things I miss now that you're gone. In fact, do you remember where you slept at night at home? On top of the bathroom towel cupboard? Remember your towel up there? Well, it's still there. I have cleaned the top of the cupboard, but your towel is just as you left it.

We will always wonder what happened to you. And we'll always hope you come home.